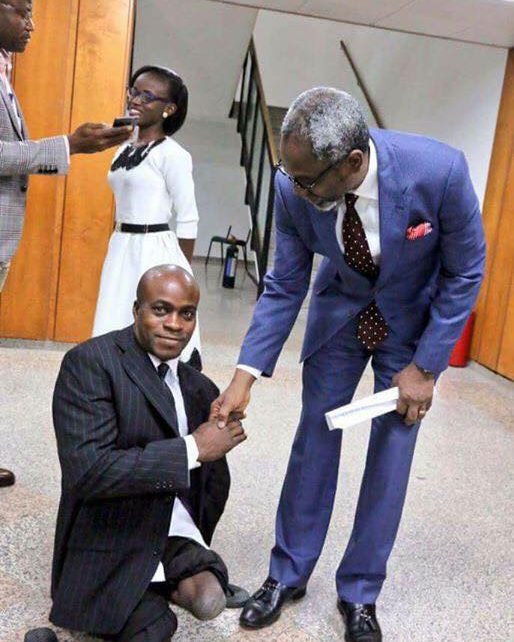 How A Poor Boy Got Transformed: Beggar Turned Lawyer

Many people say success in life is luck or destiny but in my words, I would confidently say it’s a choice. If you prefer to sit idle and expect opportunities to come your way, even God will shake not be happy with you.

The truth is, you have a large say on what your end will look like, nobody else determines that.

Little wonder people like inventors and great philanthropists were individuals that failed but quickly pick themselves up to start afresh.

Amongst different unique stories of success I have heard in life, the story of Idowu is one in a million.

I read it over and over again to remind myself that, if a lame man could sponsor his education from age 8 till age 37 and achieved two degrees back to back, there’s nothing a full human being without disabilities like you and I  cannot achieve. 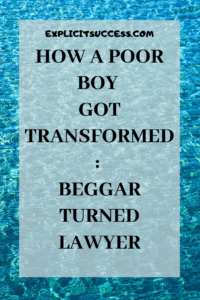 The success-driven Abdusalam Idowu was born sometimes in 1979 to Mr and Mrs Idowu.

Shortly after his birth, he was inflicted with Polio and crippled by it. Guess what, He was just three years old!

As if that was not enough, life punched the poor boy with another fierce blow at his tender age. He lost his mother.

His father and other relatives lost all hopes on him and stopped paying for his primary school education. Obviously, his lameness made them lose interest in his future.

He wasn’t promoted to primary one because his fees were not paid. Sadly, he challenged his father and paternal grandmother for not supporting his education. Unfortunately, his tears fell on deaf ears.

His unparalleled determination kept pushing him through life irrespective of his physical condition, Abdusalam moved to the streets to source for funds and support.

He didn’t let his poor status limit him. He started begging at the age of eight in Erin ile, Kwara state. Idowu saved every penny at that young age to feed himself, pay for his uniforms and pay his fees through primary and secondary school.

In his final year, He also paid for his final exams (WAEC), failed the first and second time, had a reseat the third year and passed.

Without doubts, he still wanted more from life. One morning, he took a train from Kwara state to Lagos state to beg for alms to further his education.

Poor Abdusalam had no shelter, no food, no extra clothes and no shoulders to cry on. The bridge became his home. He just wanted an education. He knew he would get more from life with education.

Even with his ordeal, he was not discouraged. He forged ahead until he gained admission as a political Science student into the University of Lagos.

Another financial need came up as he needed to pay his acceptance fee and tuition fee but had only 39,000 in his savings account.

That wasn’t his choice of study but he needed to just start first. He begged more. Walked the nook and cranny of Lagos to ensure he gets money to secure his admission.

The additional money he saved was gone by the end of the first semester.

Fortunately, he had a ray of hope when PUNCH newspapers published his story and some sympathetic Nigerians and organization decided to support his education.

While his first degree was coming to an end, he sat for GCE, JAMB and Post-JAMB exams for his desired course – Law. He really desired to be a lawyer.

As he was working on his final year project in Political Science, he gained admission again to study Law in 2011.

He simply wrapped up his first degree and started his second degree immediately. He finished his degree in Law successfully and went on to Nigerian Law School.

Abdusalam studied hard, passed all his final (August/September 2016) bar examinations conducted at the end of the one-year programme.

He was called to practice law in Nigeria alongside 4,225 graduates during the call-to-bar ceremony in Abuja. He finally heaved a sigh of the fulfilment of life ambition after all the years of struggle.

“I wish to set up my law firm later and in the nearest future I want to become a judge,” said Idowu in a firm, positive voice.

Now tell me what excuse you have not to succeed in Life. If a poor boy could push himself through many hurdles, you have no excuse to fail.

I leave you with this – Success and Failures in life are deliberate CHOICES you have to define yourself.

Just imagine what he would have made out of life if he had no disability!

Abimbola Joseph is a creative content developer who derives pleasure in encouraging individuals to be the best they can be in all relevant facets of life. She believes that we all have a better version of ourselves which can be leveraged to impact others and make the world a better place. Connect with me on Instagram @abimbolajoe.

2 Replies to “How A Poor Boy Got Transformed: Beggar Turned Lawyer”